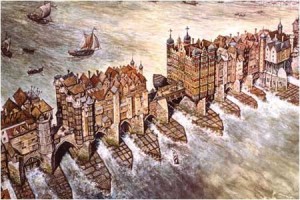 London Bridge is falling down,

London Bridge is falling down,

I wonder how many of the thousands of commuters who stream across London Bridge every day remember or even know the nursery rhyme? Of those who do, how many are aware that the words refer to real people and real events? And that there is an older version.

London Bridge is broken down,

Dance over my Lady Lee,

London Bridge is broken down,

With a gay ladye

There’s hardly a corner, an alleyway, a stone in London that isn’t steeped in history. London Bridge itself can be traced back to the first century, when the Romans built the original one out of wood and clay. This was replaced at various times using alternative materials, like those mentioned in the rhyme. Though I doubt it was ever built with silver and gold.

Both rhymes propose various ways to rebuild the bridge so it won’t fall down again. Starting with wood and clay that will be washed away, then bricks and mortar but ‘they will not stay’. Various other materials are mooted such as iron and steel, silver and gold and a watchman. Each suggestion is rejected in turn, as befits a rhyming game. To some extent the rhyme follows the actual fate of the bridge.

Over time the bridge was destroyed, rebuilt, destroyed again. At one stage it was attacked by the Vikings: this resulted in a stronger replacement, complete with drawbridge. In the 12th century the first stone bridge, designed by Peter de Colechurch, superseded the then current bridge.  This took thirty-three years to build. Hardly surprising when you know that it featured twenty arches, each one sixty feet high and thirty feet wide. At various times during the fourteenth century it carried no less than 140 shops (some accounts put it at as many as 200). Hence the reference to silver and gold in the verse.

This bridge survived the Great Fire of London in 1666 though buildings with thatched roofs were banned in the metropolis from then on. Incidentally, it was another three hundred years before the ban was lifted to allow the building of the new Globe Theatre, in 1994. While the great fire it didn’t destroy the bridge, it weakened it. In consequence various changes were made in the ensuing years, such as strengthening the foundations, removing buildings and restricting traffic.

While the stone bridge lasted much longer than many others, it was eventually demolished in the 1820s and a new London Bridge was built on a site near the old one. This nineteenth century bridge was replaced in 1960s; it wasn’t destroyed but sold to the Americans, being dismantled stone by stone and rebuilt in Arizona, of all places.

So much for the physical bridge. But what of the people referred to in the rhyme? Who was the fayre or gay layde; who was Lady Lee? For the answers we have to go back to the story of Henry VIII and Anne Boleyn, his second wife. She is indeed the layde referred to. Lady Lee is Lady Margaret Lee, a close friend of Anne’s. She and Anne were childhood friends. When they grew up Margaret became Anne’s trusted lady in waiting and remained with her throughout the good times, even standing beside her on the scaffold.

Anne was hated by the common people who found her high and mighty. They also had a strong allegiance to Henry’s first wife, Katherine of Aragon. Open criticism of Anne was officially approved of after her death. This situation continued during the remainder of Henry’s reign and subsequently that of Mary. However, when Elizabeth I ascended to the throne things changed. Elizabeth was Anne Boleyn’s daughter – the criticism could no longer be open, so it went underground.

The rhyme is an allegory, that is to say it describes one thing by means of something else. Thus the words of the rhyme describe the rise and fall of Anne Boleyn. Lady Lee is mentioned to ensure that there will be no doubt that the ‘gay layde’ is Anne. Although the nursery rhyme associates the bridge with Anne’s death, she was in fact executed within the walls of the Tower of London. But London Bridge itself did indeed see plenty of gruesome sights. The severed heads of traitors, impaled on spikes and dipped in tar, were regularly displayed at its Southern Gatehouse.

2 Responses to Who was ‘Lady Lee’?