Posted on November 5, 2011 by Clodagh Phelan

While the Angel of the Star of Love may sound suitably romantic, some angels have jobs that positively beggar belief.

The Dictionary of Angels is a unique book. A mixture of serious scholarship and delightful whimsy.  The New York Times called it a ‘wacky and wonderful compendium of angelic lore. ‘ While the book naturally contains much erudite information there are also many quirky, little known facts.

It was news to me that there are angels over clouds. That angels guard the gates of the South Wind, as well those of the North, West and East winds.  All nature seems to be covered. Rivers and running streams, showers (not I think the one in the bathroom), the sun’s rays, whirlwinds, earthquakes and the rest. Even vegetables have their own special angel. So does fruit, not to be outdone.

The animal kingdom is well represented. There’s an angel who’s job it is to return small birds to their owners, another for birds in general, though doves get a special mention for some reason.  Maybe because of the Ark! Other angels, respectively, look after ‘wild fowl and creeping things’. Tame beasts have their champion angel and wild beasts do too. There are angels over fish, aquatic animals, the ocean and the deep.

The book includes the fallen angels.  And there are plenty of those.  Take Abbadona, not an Abba tribute band but a rather dithery fallen angel.  Known as the penitent angel it seems he wasn’t entirely committed to the rebellion and kept moaning about his fallen state. So he got a reprieve.  They were probably glad to get rid of him.

The splendidly named Watchers are another fallen lot.  Sent from heaven to instruct the children of men, they were condemned for cavorting with their charges. Though they weren’t all sent to outer darkness, some stayed in the 5th Heaven. We’re not told whether that was because they behaved themselves or for some other reason.

Writing didn’t get a particularly good press either. The angel Penemue ‘taught mankind the art of writing with ink and paper.’ An art that was frowned on: it was thought to be wicked and corrupting and as a result ‘many sinned.’ Better watch it, all you writers out there.

There are angels for the days of the week, the signs of the zodiac and the twelve months of the year. There are angels whose task it is to look after countries and watch over professions. Yes, including the oldest one. Not doing a very good job, some of them. Javan, the angel of Greece, really needs to pull his socks up. Anauel, on the other hand should give himself a pat on the back, though I for one would rather like to shoot him in the back. His task? Protecting commercial bankers.  No one could claim he isn’t doing his job.

Posted on September 3, 2011 by Clodagh Phelan 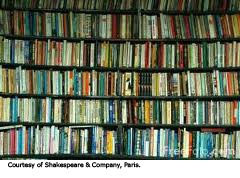 The material in this post comes from my old website.  I had always meant to update it but never got round to it.  Now that the new website is up and running and the blog is too, I think this stuff is better on the blog. It’s a totally random selection of some of the books I have enjoyed.

Ridley Walker – Russell Hoban.  A must-read for anyone intrigued by language.

Where the Wild Things Are – Maurice Sendak.  A children’s story, also much loved by adults and artists.  Extraordinary imagination and amazing illustrations recently made into a film that, for once, is more or less faithful to the brilliant original.

Midnight in the Garden of Good and Evil – John Berendt.  Fantastic, dark, intriguing, factual.  A cross between a travelogue and a crime mystery.  Makes you long to visit Savannah.

Mortal Engines – Philip Reeve.  An astonishing debut novel for children, but a great read for grown ups too.  London on wheels.  Yes, you did read that correctly.  Read the book.

If Nobody Speaks of Remarkable Things – Jon McGregor.  Another wonderful debut novel. Beautifully written, spare and compelling.  The tension is almost unbearable. And he’s written two more since then – both different, both amazing!

The Shipping News – E. Annie Proulx. One of my bibles. A book I return to again and again for its power and its poetry, its characters and its quirkiness.

Amusing Ourselves to Death – Neil Postman.  The effect of mass media on society. An instructive, if chilling, book.

A Dictionary of Angels – Gustav Davidson. Perfect dipping in material. Did you know there is an angel over vegetables? And an angel who returns small birds to their owners?

More to come. Watch this space.