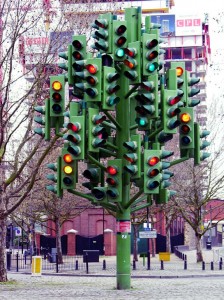 When travelling round London on the bus, I prefer to sit on the top deck but only if I can sit at the front. Not only do you get a great view of rooftops, but also, if you look carefully, the sight of hidden treasures – sculptures perched on the top of buildings, roof terraces and oddities like the lighthouse at Kings Cross.  Of course you don’t have to be on the top deck of a bus to see all these glories. Many are down in the streets – if you know where to look. There are so many odd, weird, fascinating and beautiful things to see in London it’s impossible to fit them into one blog post. Today I’m going to concentrate on statues and sculptures and for these and for future posts on this topic I am indebted principally to the Shady Old Lady website.

So rich is London in these delights it’s hard to know where to start. Should it be the New-born Baby sculpture in the porch at St Martin in the Fields, the Giant Plug and Socket on the side of an electricity sub-station in Ganton Street, Soho or the Neil’s Yard Water Clock in Covent Garden where water rises, bells sound the hour and flowers appear to grow. You also need to avoid a drenching by the figure of a child who tips her water onto the unwary below.

None of these sculptures are difficult to find. Others require a little work. Not that they are exactly hidden but some are not obvious and for others you will have to travel away from the centre. In the first category, there’s the nose inside Admiralty Arch at the top of the Mall. Did you know it was there? I didn’t.  Walk into the right hand arch, look up at the left side and you’ll see it. Apparently the horse guards touch it for luck as they ride through – being on horseback they can actually reach it. While in the locality, take a stroll to The Westminster City School in Palace Street and look up at the roof of the new building. There’s you’ll find the Dandelion Sculpture created by the pupils in 2010 out of re-used plastic fizzy drinks bottles. As it catches the wind it throws colour in every direction – beautiful and ethical!

Leaving the centre of London we’re going first to Wanstead, then on the Docklands Light Railway to Silvertown and finally to the Greenwich Peninsula. This may be the wrong way round but I haven’t looked it up on Journey Planner (though they do often give you some extremely weird and illogical routes.) In Wanstead you’ll find a plaque commemorating a stolen cherry pie, in Silvertown, on the wall of the Tate and Lyle factory a giant tin of Golden Syrup and on the Greenwich Peninsula Antony Gormley’s Cloud sculpture. Even taller than the Angel of the North it was commissioned for the opening of the Millennium Dome, now the O2.

On the way back from Greenwich visit the Traffic Light Tree at Canary Wharf.  Impossible to have a favourite among so many wonderful oddities but I must confess that I find this installation really endearing. A weird term to apply to such an object perhaps, but that’s how I feel about it. Designed by Pierre Vivant it has 75 sets of traffic lights and is supposed to reflect the energy of the area. Energy is not the word I’d apply to Canary Wharf but I do love this statue – it’s quirky, mad and fun and as such it’s as far removed from the atmosphere of Canary Wharf as it’s possible to get.

And having written that last sentence I went to take another look at the web pages to select the best image. And what do I find. The Traffic Light Sculpture has been removed – to make way for road improvements. How sad, how typical. Canary Wharf is the poorer for it (there’s more than one way of being poor just as there are different ways of being rich.) If anyone knows what happened to the statue, please let me know.