How many cows does it take to make an airship? 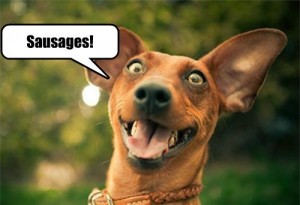 “Laws are like sausages, better not to see them when they are being made.” This remark, in various forms and guises, is attributed to Otto von Bismarck, among others. Whether it was Otto who said it or someone else, they definitely have a point. Some of the stuff that goes into the modern sausage would have you reaching for the sick bowl. Or, in my case, the scotch. This is not to denigrate all sausages. Indeed sausage making has become something of an art form with thousands of varieties being created throughout the world. A cornucopia of flavours and combinations. Some delicious. Others frankly weird. Venison with redcurrant and red wine, duck with orange and apricot, beef and Guinness. Tasty! Rattlesnake and rabbit. Emu and Elk. Dubious to say the least

There is plenty of evidence to show that the sausage was well known in ancient Greece and Rome. Indeed the word ‘sausage’ comes form the Middle English, sausige, which derives from sal, the Latin for salt, that well known preservative. Early man made the first sausages by stuffing roasted meat into stomachs. Animal stomachs, I hasten to add. And dead ones at that. It would be a brave man or woman who attempted to stuff a living bear or bison. No guesses as to who would end up as the filling if it happened the other way round.

Our British banger got its name in the First World War.  There were food shortages; meat in particular was scarce. There was little to spare for sausage making. So the manufacturers packed the casings with scraps – bits of vegetables and water. When they were cooked over open fires, notably on shovels in the trenches, the water caused them to hiss and burst and pop. Hence ‘bangers’.

The humble sausage is associated with far meatier things than the full English. Indeed it played a part in the birth of Reformed Protestantism. Not many people know that! It happened in 1522, in Zurich, when a small number of believers met together to defy the teaching of the Catholic Church, which banned the eating of meat in Lent. Led by one Christopher Froschauer they declared that nowhere in the bible did it say you couldn’t eat meat in Lent. So there. The city council finally got round to agreeing with them and passed a law stating that’ No Christian is bound to do those things which God has not decreed.’ And quite right too.

Not only did the modest sausage play its part in the birth of a religion, it also features in the annals of war. For this we again go back to the First World War when the German High Command had a weapon with which it planned to bring Britain to its knees. The Zeppelin airship. These engines of war were responsible for the first bombing campaign directed at civilian targets. Though only 1,500 people were killed – only! – the raids brought terror to the populace, in particular on the South and East coasts where the raids were heaviest.

It was bad luck for the Kaiser when, despite the widespread panic, the campaign failed in its attempt to completely smash morale. Bad luck too for the German populace and even more for German cows. Sausage eating was banned for the duration. Why? Because cows intestines, the very ones used to make sausages, were a vital component in the manufacture of the airships. The technique by which the intestines were turned into gasbags to hold the hydrogen has only recently been discovered and is the subject of a Channel 4 documentary.

So for the Germans it was the wurst case scenario (couldn’t resist!). They may have scared the pants off the Brits, but they didn’t succeed in ending the war. On top of that they were deprived of their favourite food. And spare a thought for the poor cows. In a macabre version of the old light bulb joke – how many cows does it take to make an airship? The answer – 250,000 and that’s just one Zeppelin. It’s enough to moo-ve you to tears (pun intended.)