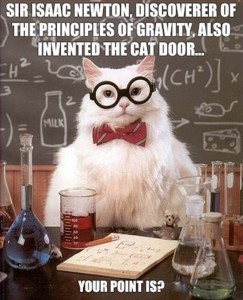 It’s been a crazy sort of week. A really good week but at the end of it I find myself dithering around and at a loss to know what to write about. This is not unusual. But it’s usually because I have too many things to choose from. This time it’s different. This time my mind is a bit like those squares of soft plastic that come in the boxes of stuff you buy from Amazon. And I’m not talking about bubble wrap; that would be interesting, at least you can pop it.

In the past weeks I’ve written about the danger of using mobile phones when driving, public address systems in airports, my deceased cat Eric and his life as a spy, sausages, cows, coastlines and contemporary art. I also love to write about the wacky, mad things people do and strange unknown facts. So, while I get my head together for next week, here are some things I’ve just discovered. They’re the sort of things that brighten up my life and make me smile. The links to the sites where I found them are at the end of this post. So, Einstein couldn’t swim and …

Walt Disney – creator of Micky Mouse – was afraid of mice

The Tory (Conservative) party was founded by a group of Irish Catholic bandits. The name comes from the Irish for outlaw or bandit. They’re certainly living up to their origins.

Virginia Wolfe wrote all her books standing up.

Pigs love Ben and Jerry’s ice cream, except for the Mint Oreo flavour.

Goethe could only write if he had an apple rotting in the drawer of his desk.

In 1980 Saddam Hussein was given the key to the city of Detroit.

Bats always turn left when they leave their caves.

The Founder of Pringles was buried in a Pringles can.