This crazy world we live in 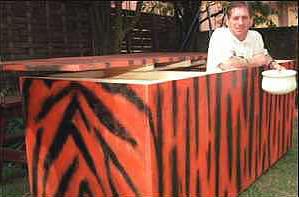 No. 1 People with too much time on their hands

I’m going to start with the longest abbreviation because it’s a contradiction in terms. Utterly, completely weird and bonkers.  It contains no less than fifty-six letters far, far longer than even the longest of words. So here it comes …and yes I did notice that the letters do not correspond to the English translation. But it’s a Russian abbreviation. Enough said.

What does it stand for? Take a deep breath. It stands for the –

Laboratory for Shuttering, Reinforcement, Concrete and Ferroconcrete Operations for Composite-monolithic and Monolithic Constructions of the Department of Technology of Building Assembly Operations of the Scientific Research Institute of the Organization for Building Mechanization and Technical Aid of the Academy of Building and Architecture of the USSR.

Yay! I wonder what they called it for short? Any suggestions?

If you had to say all that every time you wanted to call them up on the phone or explain where you worked you’d probably have lost the will to live. Which brings me to Geoff Smith. Maybe he thought his name was just a bit ordinary so was prompted to do something a little different. Or maybe it was because of his mother. Whatever it was, it’s our Geoff who holds the record for the longest time being buried alive.

His ordeal began on 29th August in 1998 and ended 150 days later. While I question whether anything self-inflicted can be called an ordeal I can’t dispute the facts. Nor would I want to. Geoff it seems spent 150 days buried in a coffin 6 feet under the garden of the Railway Inn in Mansfield, England. Breaking the old record of 141 days and the European record of 101 days, which had been set by his mother 30 years earlier. I’m not sure why his coffin was painted to resemble a tiger – it will probably remain forever a mystery. Like why anyone would want to break the world record for being buried alive.

If I delved any deeper into this crazy blog I’d be here all day.  So – you’ve got the link. Have an explore. If you have any time to spare that is – but I must say it is addictive. So don’t say I didn’t warn you.

How to make statistics look amazing …

If you can ignore the rather harsh tones and persevere beyond the first few seconds, this video will open your eyes to history, health and, indeed, statistics. Truly inspiring – and should be developed further and shown in schools!