Tag Archives: The Tin of Ham

Can a building ever be cuddly? 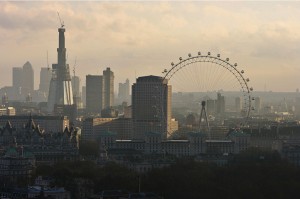 They are made of steel and glass, of reinforced concrete and plastic, of bricks, mortar, marble and granite. They tower over London, they soar into New York skies, they arrest the eye in Beijing and defy gravity in Dubai.  Love them or hate them the world’s iconic buildings are works of art, extraordinary achievements or eyesores – depending on your point of view.

Magnificent, extraordinary, breath-taking, ridiculous, wasteful, ground breaking, stupid – whatever your opinion they are here to stay. Well for the moment anyway.  The architects of the brutal tower blocks and ugly egg boxes of the sixties and seventies can hardly have imagined they’d see their creations razed to the ground in their lifetimes.  And so it may be with the current crop. Though not for some time.

These edifices are variously stark, glittering, towering, monumental and inspirational. They are larger than life, not on a human scale.  Yet we persist in giving them cuddly, human nicknames. No sooner does the press get whiff of a new building than they slap on a pet name.  Of course some of these may have been coined from the grass roots, but in general I imagine they first appear in the media.  That said, it’s one thing to name a building and another to have the name stick. The fact that they are widely used is down to the fact that they fit and that people accept them. And the more they are used, the more they stick.

This didn’t happen so much in the past. Buildings like the Chrysler and the Empire state weren’t given nicknames although the latter has one of sorts since the Empire State was in fact a nickname for New York State itself. These skyscrapers were, in the main, the flagships of large corporations. And were built in a very different era from ours where corporate dignity would not contemplate such indignity – besides the names themselves were a form of publicity. One notable exception was the Flatiron building at 175 Fifth Avenue, Manhattan. Indeed the whole district subsequently took the name.

Perhaps it’s a sign of our changing attitude to corporations – we are more cynical, less reverent and at the same time less compliant. The corporations and architects too are complicit – having your iconic building known by a popular and cuddly name is good marketing.  London currently has at least 10 of these buildings in varied and extraordinary shapes and sizes. The one thing they have in common is standout futuristic design and cuddly human scale nicknames.  With one exception.

Perhaps another reason is the way that their shapes virtually dictate their names. Thus we have the Gherkin at 30 St Mary Axe, soon to be joined by the Can of Ham nearby at numbers 60-70. In fact the City of London has quite a cluster of food and kitchen inspired names. There’s the Cheesegrater at 122 Leadenhall Street and the Pint at 20 Fenchurch Street, though the latter is more popularly known as the Walkie Talkie.  For more food inspired names you have to travel to City Hall on the South Bank, or the Onion, and to the Olympic Park where the Velodrome is known as the Pringle.  Although the Shard, at 32 London Bridge, is known by some folks as the Salt Cellar, the former is the name that has stuck. It’s an appropriate name for the tallest building in Western Europe and is the exception – there’s nothing cuddly about a shard of glass.

Some people loathe this anthropomorphising of buildings. Others decry what they see as the destruction of the London skyline. I like the names. And the buildings – they add interest and quirkiness, enlivening the surrounding areas. London Bridge, traffic nightmare that it is at present due to the construction work, is a case in point. The Razor, London’s newest high-rise apartment building with its built in wind turbines will, I hope, generate new life into Elephant and Castle. It would be difficult now to imagine London without its Eye. And the Helter Skelter, formerly known as Bishopsgate Tower, will continue the fairground theme. The names are fun, the buildings are beautiful and weird and strange. I defy anyone to catch a glimpse of the Eye shining electric blue at night or to see the Shard rising through the mist and not be moved. 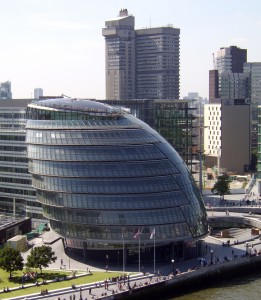 Posted in Blog, Iconic Buildings, London | Tagged City Hall, London Eye, The Cheesegrater, The Gerkin, The Helter Skelter, The Pringle, The Razor, The Shard, The Tin of Ham | Leave a comment