Whiskers on kittens and marmite on porridge …. 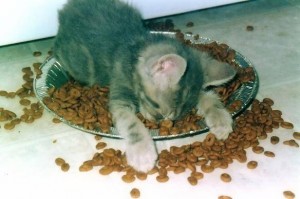 …  high protein cockroaches and bacon with cupcakes. No these are not a few of my favourite things, except for the whiskers on kittens bit. I wouldn’t be averse to having a go at bacon cupcakes though but I hate marmite. Hate, it hate it hate it. Bacon, however, seems to be very much in vogue. With absolutely everything. And I don’t think it started with Heston but maybe he’s the one who got everyone at it.

A little while ago I wrote a piece about food fads and fetishes for Eat Me magazine. While doing the research I was surprised to discover some of the things people will eat, still less enjoy.  I’m not talking about the milder combinations like cheese and strawberry jam. Or cornflake ice cream (which is delicious) or even ham and marmalade spaghetti.  But yes, in Malaysia they do eat marmite on porridge. Other weird combinations include banana with mayonnaise and Nutella and peas. Some folks like to eat everything frozen – M&Ms, grapes, pickle juice, mashed potato and not surprisingly ice cubes.

Of course not everyone is content with simply eating their food. Smearing foodstuffs all over your partner and licking it off again is considered fairly normal nowadays – though I doubt that as many do it as say they do. I certainly prefer my chocolate straight out of the pack and my olive oil on the salad. But then I don’t like being sticky. Some don’t stop at chocolate and olive oil, or so I’m told. Cream, golden syrup, sticky toffee pudding. These I can understand. But mashed potato? And Tapenade?

Unusual as some of this may seem, it’s nothing compared to the things some people put in their mouths. Most of us will have heard of pregnant women and small children eating coal or dirt. This is actually a form of pica, a disorder that leads people to crave substances not generally considered food.  Some forms of pica can be genuinely distressing and can also be dangerous. Not only is there a risk of poisoning, but sharp objects may tear the stomach lining.

I haven’t even started on the celebrity diets – the most extreme of these being perhaps the Maria Callas. She swallowed a tapeworm, though there’s some doubt as to whether or not she did it on purpose.  All I know is that she was fat – and she got thin. Our modern celebrities haven’t gone that far. Yet.  Give them time.

If you’d like to read the article in full, just click on Pages on the right, then on Food.