Posted on February 5, 2012 by Clodagh Phelan

Who would have thought that a festival titled Death could be so stimulating! Or such fun.  Well I would for a start, but then I rather like the strange, weird and offbeat. I’m cheating a bit mind you because that wasn’t the full title of the event. Its full title was Death: festival for the living and it was held at the South Bank last weekend.  And in case you might have thought it would be somewhat gloomy, macabre or even distasteful a glimpse at the jolly yellow programme cover with its lively horses and neon stencilled coffin would make you think twice. 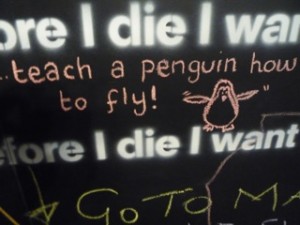 Good luck with that …

There were all manner of things to see and do, most of them fun, all of them informative.  For me one of the highlights was ‘Before I Die’ part of an on-going international project by artist Candy Chang. Visitors were invited to share their dreams, ambitions and resolutions – on an enormous L-shaped chalkboard. The contributions ranged from the poignant ‘before I die I want to meet my gran’ to the wit who declared that they wanted ‘to get away with murder.’  There was endless variety – one individual wished to follow in Jesus’ footsteps, literally, including the resurrection, someone else longed to teach a penguin how to fly and another message said plaintively ‘before I die I want to have a puppy.’

Scattered around the foyers of the Royal Festival Hall, a variety of jolly coffins added to the general air of merriment.  These creative inventions are the work of the Paa Joe workshop in Ghana and Crazy Coffins in Nottingham. A few, such as the giant corkscrew coffin, were imaginative exercises, but for the most part they were commissioned by people who wanted to celebrate their life as well as their death in a truly unusual, and indeed a life-affirming way, if that’s not too much of a contradiction and I don’t believe it is. 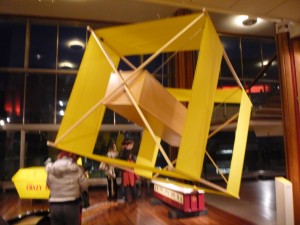 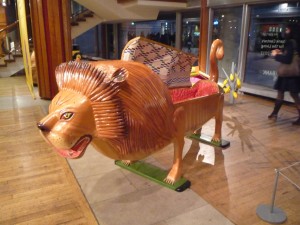 Gives a whole new meaning to being eaten by a lion 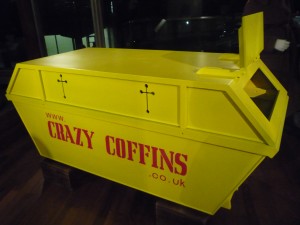 I love the crosses – nice touch!

For me, however, the true highlight was the Sandi Toksvig Memorial Lecture. Entitled ‘Die Laughing’ it certainly lived up to it’s billing except for the death bit. No one died, as far as I know, and if they had they would have gone out in the happiest way possible. I did bruise my thumb I clapped so much and got a sore throat from the community singing but I wouldn’t have missed it for the world. What with some wonderful singing, a guest appearance from Jeremy Hardy, the unforgettable knowledge that a cockroach can’t pee and Sandi T herself, who must be one of the funniest persons on earth, I rolled out onto the South Bank with a grin from ear to ear and very happy to be alive.