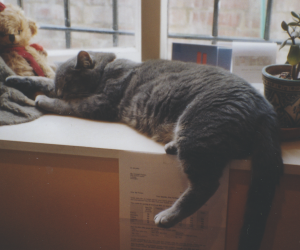 This is the story of my cat, the beloved Eric Longfellow, and of a wonderful organisation called SNIP – The Society for Neutering Islington’s Pussies. I have to admit that the name makes me giggle, but that in no way detracts from the great work they do.  I first came across them when I was about to adopt Eric – although that’s not quite the way it was, as you will see.

I hadn’t had a pet of my own as an adult though we’d had family dogs and cats, not to mention Jane, the evil pony.  One day, some years ago, I realised I was being watched from the tangle of Forsythia at the end of the garden.  Two large golden eyes were staring at me. But when I moved, the cat disappeared. It reappeared a few days later. I played a waiting game, standing perfectly still whenever I was aware of its presence. I put out food, gradually moving it nearer to the house.

Eric became bolder. I dithered. I wasn’t sure I wanted a cat – it’s quite a commitment.  He had other ideas and took to spraying my back door. He knew what he wanted. I let him into the house. He took over my bed, sleeping on his back with his legs in the air in a trusting, if inelegant, manner. He wasn’t neutered and he really stank. Which is why, at first, I called him Smelly Cat. 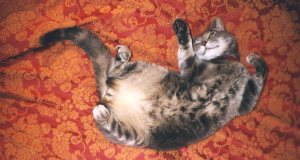 One day I came home and he’d gone. I couldn’t find him anywhere and was so upset. Just when I thought he was gone for good I woke up to find him on my bed – with a smashed leg. How he got through the cat flap I’ll never know. This is when SNIP came to the rescue. I’d been talking to them about having him neutered.  Now of course my mind was made up for me and I was suddenly responsible for a badly injured cat. It sounds pathetic but I didn’t know what to do.

SNIP found a vet, negotiated the fee and paid most of it. I’d brought in a handsome, if tatty, furry grey cat. I collected a furious little creature who looked more like an alien than a cat; shaved all over with steel bolts protruding from his leg. To cap it all they announced that he had feline AIDS. It wasn’t a great start.

Poor Eric, confined to a small cage in my bedroom, was terrified, furious and in pain. I was horrified to find myself the owner of a howling, smelly cat that tore everything within reach to shreds, including flesh. I had to handle him with gardening gloves. He was really constricted in his cage. I begged the vet to let me take him out; I’d keep him in the bedroom, I promised. ‘As long as he doesn’t jump’ said the vet. ‘He’s a cat’, I thought, ‘he jumps’. But I kept it to myself.

The day I let Eric out of the cage, I was rewarded with his first purr. That night this angry, spitting creature transformed completely. He cuddled up close to me with his paw on my arm. He didn’t move from my side all night and slept on my bed from then on.  As to not having to worry about this independent cat – I worried. Of course I worried – until the day my beautiful fellow died of cancer after 7 years with me. I still miss him. 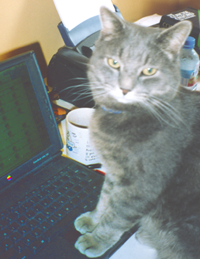 And SNIP?  Lately it’s been transformed.  There are several similar charities doing great work trapping feral cats in Islington and the surrounding area.  However, trapping and sterilising them is one thing. What to do next is another. Most of the cats will remain feral. They can’t be returned to where they were found – they are attacked by dogs or poisoned by people who want to get rid of them. It’s a miserable existence.

The great people at SNIP and the other charities have found a solution.  They are now devoting their energies to finding kind, responsible homes for ferals in stables and smallholdings across the country.  These people love their animals and often have problems with rats and mice. It costs them nothing but some straw and a few tins of Whiskas. The cats are warm and safe and undisturbed. Everybody’s happy. 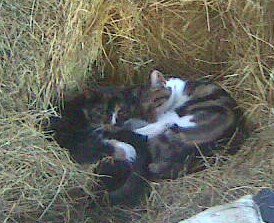 Like all other charities, SNIP is struggling in these difficult times. If you can help in any way by displaying posters, by spreading the word, by letting them know if there are feral cats in your area – please do get in touch.

If you can volunteer to do some driving or trapping or you want to adopte any ferals or friendly strays, please call their re-homing line on 07557 118 484